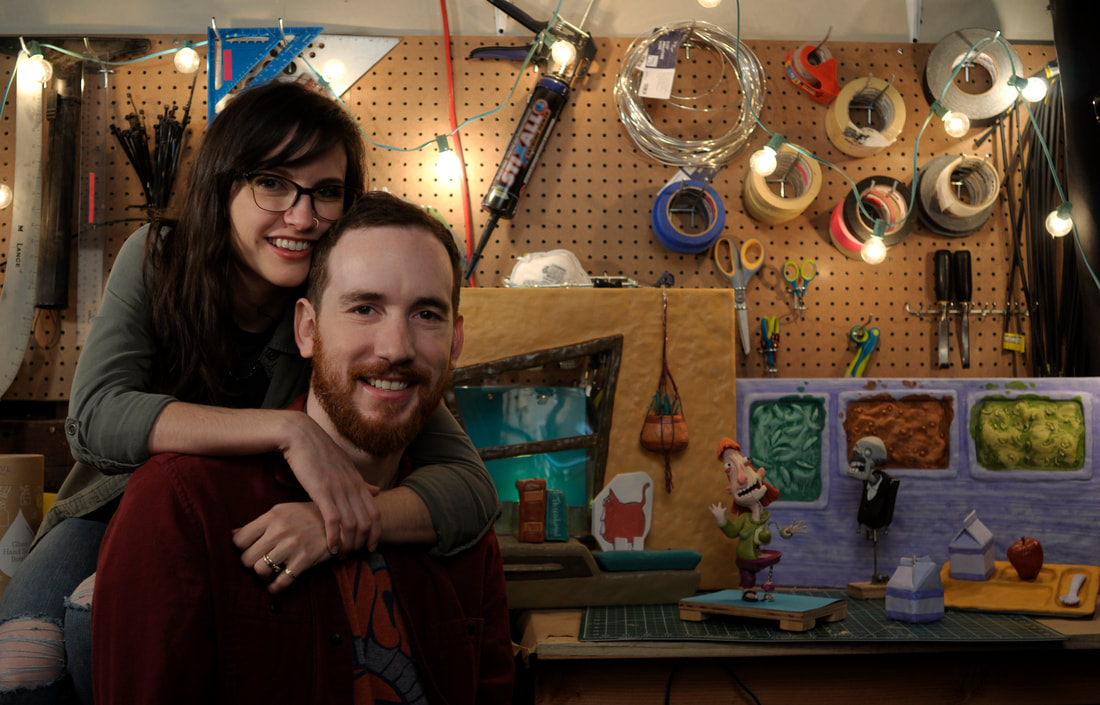 Scott and I met during the walkthrough portion of my job interview for a graphic artist position at a local furniture store. It was just after I graduated college and it was my first professional artist opportunity. Scott had already been working there for about two years when I came in for the interview, we had both been recommended for positions by our college professor at the University of Connecticut where we each showed some interest in animation and stop-motion. Scott dabbled in 2D animation and had experimented with clay animation because of his love for “Creature Comforts” as a kid, and I shifted from paper cutout illustrations to building puppets, sets and costumes for 3D illustrations (destroying my childhood Barbie furniture in the process). Our professor connected us with the furniture store because our eventual boss and mentor was using stop-motion to create advertisements there. Despite having been students in the same small illustration program, Scott and I had never crossed paths before my job interview and from the moment that we met – I knew I was in trouble.

During our time collaborating on furniture ads and staying late to do personal work, we realized that not only did we appreciate each other’s work, but also that we were super into each other! We dated “secretly” until we moved in together and told our very unsurprised boss about our very not secret romance. Thankfully it wasn’t a problem and we continued working there while also using what we learned from our boss to create goofy side projects in the spare bedroom of our apartment. The first project we did that involved some form of a production schedule was an open call for a Doritos Superbowl commercial. Scott created the puppet, animated, directed and lit the project while I designed and created the hero prop and handled the cleanup/ VFX. That animation didn’t do much for us publicly, but it eventually helped us move on from the furniture store to the animation studios here in LA where we learned the ropes of major stop-motion productions.
​
After the Doritos spot, our roles with each other generally remained the same. We still spent our time making our goofy side projects until we decided that it made sense to do client work. We just wanted to make things where we were in total control of how it looked, and it’s difficult to do that on large studio productions. We deeply care about the design and quality of our work and we’ve informed each other’s sensibilities over the years. We have very similar habits for color and shape language and through our relationship and similar visual interests, we’ve naturally merged our aesthetics over time. Depending on the project, we alternate or share the main creation and direction of the concept, although I now take on more up-front responsibilities after realizing the importance of a good producer to keep projects on-time and within a budget. We’ve been together for ten years (married for three) and we’ve figured out how to create together while also working on our relationship, that way when disagreements arise (because they always do in a creative atmosphere), we know how to break them down and work through them without too much judgement or bitterness. We still have conflicts when we’re not communicating effectively, but we’re able to iron those out and we’re always excited to deliver a project together.
Threadwood